The End of the Princess Movie?

Posted on November 22, 2010 by paperbacksnpostcards

Since Disney believes the title “Frog Princess” alienated boys, “Rapunzel” is now “Tangled.” Happily ever after?

Says the producer, “In our film, the infamous bandit Flynn Rider meets his match in the girl with the 70 feet of magical golden hair…We’re having a lot of fun pairing Flynn, who’s seen it all, with Rapunzel, who’s been locked away in a tower for 18 years.” We’re imagining Enchanted, but with Pantene-style tresses. As the LA Times tells us, “hints of swashbuckling action are already being leaked online.”

There are of course plenty of other reasons for the studio to rejigger a story that’s long been considered the most cut-and-dried of the rescue narratives. And I won’t lie, anything that evokes Errol Flynn gets more of a pass with me than it really should. But the issue, as Disney sees it, is that, wait for it, the fairy tales are too inclined to have female protagonists. Well, yes. If they think they’re going to fool kids into thinking Rapunzel is a newly-conceived action film – well, actually, maybe they will.

Disney Animation is closing the book on fairy tales

Once upon a time, there was a studio in Burbank that spun classic fairy tales into silver-screen gold.

But now the curtain is falling on “princess movies,” which have been a part of Disney Animation’s heritage since the 1937 debut of its first feature film, “Snow White.” The studio’s Wednesday release of “Tangled,” a contemporary retelling of the Rapunzel story, will be the last fairy tale produced by Disney’s animation group for the foreseeable future.

“Films and genres do run a course,” said Pixar Animation Studios chief Ed Catmull, who along with director John Lasseter oversees Disney Animation. “They may come back later because someone has a fresh take on it … but we don’t have any other musicals or fairy tales lined up.” Indeed, Catmull and Lasseter killed two other fairy tale movies that had been in development, “The Snow Queen” and “Jack and the Beanstalk.”

To appreciate what a sea change this is for the company, consider that a fairy tale castle is a landmark at Disney theme parks around the world and is embedded in the Walt Disney Pictures logo. Fairy tale characters from Disney’s movies populate the parks, drive sales of merchandise and serve as the inspiration for Broadway musicals.

Alas, Snow White, Sleeping Beauty, Ariel, Jasmine and the other Disney royals were all born in the 20th century. Now, different kinds of Disney characters are elbowing their way into the megaplexes and toy aisles, including Pixar’s “Toy Story” buddies Buzz Lightyear and Woody, Capt. Jack Sparrow from “Pirates of the Caribbean” and a platoon of superheroes from the recent acquisition of Marvel Entertainment.

Over the decades, Disney has benefited from the ticket sales and licensing revenue generated by such princess-driven properties as “The Little Mermaid,” “Beauty and the Beast” and “Aladdin.” The studio’s most recent offering, however, was a clear disappointment. Although critically acclaimed, last year’s “The Princess and the Frog” was the most poorly performing of Disney’s recent fairy tales.

In the age of mega-franchises when movies need to appeal to a broad audience to justify a sizable investment, Disney discovered too late that “Princess and the Frog” appealed to too narrow an audience: little girls. This prompted the studio to change the name of its Rapunzel movie to the gender-neutral “Tangled” and shift the lens of its marketing to the film’s swashbuckling male costar, Flynn Rider.

Disney hopes “Tangled” will draw boys, teenagers and adults to the theater, succeeding where its frog-prince saga failed. But it’s taking no such chances in the future. Its current animation roster includes “Winnie the Pooh,” a return to the Hundred Acre Wood, and “Reboot Ralph” — itself a restart of an older project titled “Joe Jump” — about an outdated video game character who’s been left behind by the march of technology.

Catmull said he and Lasseter have been encouraging filmmakers to break with safe and predictable formulas and push creative boundaries.

“If you say to somebody, ‘You should be doing fairy tales,’ it’s like saying, ‘Don’t be risky,'” Catmull said. “We’re saying, ‘Tell us what’s driving you.'”

So why has the clock struck midnight for Disney’s fairy tales?

Among girls, princesses and the romanticized ideal they represent — revolving around finding the man of your dreams — have a limited shelf life. With the advent of “tween” TV, the tiara-wearing ideal of femininity has been supplanted by new adolescent role models such as the Disney Channel’s Selena Gomez and Nickelodeon’s Miranda Cosgrove.

“By the time they’re 5 or 6, they’re not interested in being princesses,” said Dafna Lemish, chairwoman of the radio and TV department at Southern Illinois University and an expert in the role of media in children’s lives. “They’re interested in being hot, in being cool. Clearly, they see this is what society values.”

MGA Entertainment, the maker of Bratz dolls, knocked the toy industry’s blond bombshell off her stilettos by recognizing how little girls’ interests have morphed.

“You’ve got to go with the times,” MGA Chief Executive Isaac Larian said. “You can’t keep selling what the mothers and the fathers played with before. You’ve got to see life through their lens.”

Other filmmakers have been grappling with this evolving sensibility.

Bonnie Arnold, an animation veteran who most recently produced DreamWorks Animation’s “How to Train Your Dragon,” said animated films must vie in the cineplex with effects-laden action films that a generation ago might have been considered more mature fare.

“You see elementary school kids standing in line to see ‘Iron Man’ or ‘Transformers,’ ” Arnold said. “To be honest, that’s who we’re all competing with on some level.”

In an effort to give the Rapunzel story a more contemporary feel, Catmull and Lasseter pushed the reset button in 2008 and brought in a new directing duo who had both worked on Disney’s animated movie “Bolt.” The Rapunzel film underwent a “total restart,” Catmull said: All the prior work was scrapped and the movie was reconceived as a musical with five songs by Disney’s veteran, multiple-Oscar-winning composer Alan Menken.

The only surviving elements, Catmull said, were “the hair, the tower and Rapunzel.”

“If we were told we would one day grow up and direct the 50th animated feature from Disney, it would blow our minds. It’s such a great honor,” Greno said. “At the same time, it comes with some challenges…. We love classic Disney, but we wanted to invent fresh, new and exciting ideas.”

For example, instead of the requisite prince, the directors designed the romantic male lead as a wise-cracking thief who mixes it up with bandits and beer-swilling thugs. The villain, Mother Gothel, isn’t the enchantress of the Grimm tale. She’s an incarnation of “Mommie Dearest.”

In one of the film’s musical numbers, “Mother Knows Best,” Mother Gothel tells Rapunzel she’s “getting kind of chubby” — a line lifted directly from a real-life mother-daughter exchange recounted during a story brainstorming session.

Disney instructed Menken to depart from the heavy Broadway musical-type scoring he made famous in “The Little Mermaid” and “Beauty and the Beast.” So the composer borrowed from leaner singer-songwriters of the late 1960s, including Joni Mitchell.

“It’s more like handmade music rather than too over-produced,” Howard said. “You’ll hear a lot of guitar music, especially when Rapunzel is singing…. That was a nice way to break away from what [Menken] had done.”

Catmull acknowledges that Disney has a lot riding on the success of “Tangled.” The film faces several challenges, not the least of which is that it opens five days after what is expected to be the biggest family event movie of the season, “Harry Potter and the Deathly Hallows Part 1.” The stakes are particularly high for “Tangled,” which by some estimates cost more than $260 million to produce, including six years of development costs. 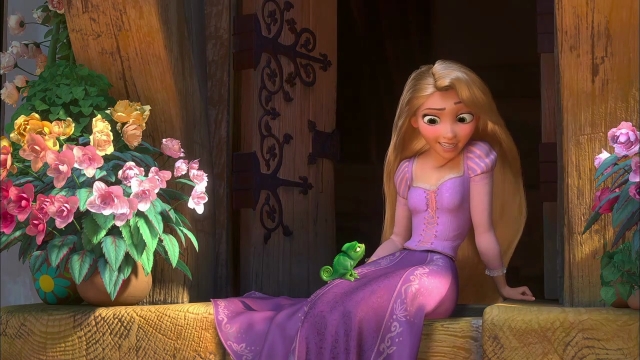