A.S. Byatt, on the tale of Scheherazade

Posted on May 11, 2012 by paperbacksnpostcards

Narrate or Die: Why Scheherazade keeps on talking 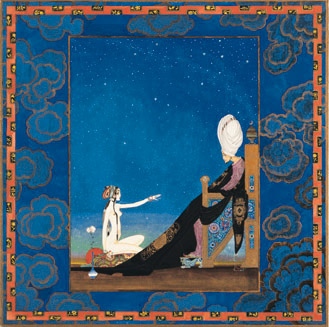 The best story ever told? Perhaps the story of the two brothers, both kings, who found that their wives were unfaithful, took bloody vengeance, and set out into the world to travel until they found someone less fortunate than they were. They encountered a demon who kept a woman in a glass chest with four locks; she came out while he slept and showed them 98 rings she had collected from chance lovers and insisted on having sex with the princes to make it a round 100. The princes decided that the demon was more unfortunate than they were and returned to their kingdoms. There the elder brother, Shahrayar, still angry over his wife’s betrayal, instituted a reign of terror, marrying a virgin each day and handing her to his vizier for execution at dawn. The vizier’s daughter Shahrazad, a woman both wise and learned, beseeched her father to give her to the king. On the wedding night, the bride asked that her younger sister, Dinarzad, might sleep under the bed, so that when the king had “finished with Shahrazad,” the younger girl, as the sisters had agreed, might ask Shahrazad to tell a story to while away the time until dawn. When dawn came, the story was not finished, and the curious king stayed execution for a night. Shahrazad continued to tell tales, which gave rise to other tales, all of which were unfinished at dawn. The king’s narrative curiosity kept Shahrazad alive, day after day. She narrated a stay of execution, a space in which she bore three children. And in the end, the king removed the sentence of death, and they lived happily ever after.

This story has everything a tale should have. Sex, death, treachery, vengeance, magic, humor, warmth, wit, surprise and a happy ending. Though it appears to be a story against women, it actually marks the creation of one of the strongest and cleverest heroines in world literature. Shahrazad, who has been better known in the West as Scheherazade, triumphs because she is endlessly inventive and keeps her head. The stories in “The Thousand and One Nights” (interchangeably known as “The Arabian Nights”) are stories about storytelling without ever ceasing to be stories about love and life and death and money and food and other human necessities. Narration is as much a part of human nature as breath and the circulation of the blood. Modernist literature tried to do away with storytelling, which it thought vulgar, replacing it with flashbacks, epiphanies, streams of consciousness. But storytelling is intrinsic to biological time, which we cannot escape. Life, Pascal said, is like living in a prison from which every day fellow prisoners are taken away to be executed. We are all, like Scheherazade, under sentence of death, and we all think of our lives as narratives, with beginnings, middles and ends.

Storytelling in general, and “The Thousand and One Nights” in particular, consoles us for endings with endless new beginnings. I have just finished my own telling of the frame story with the European fairy-tale ending, “they lived happily ever after,” which is a consolatory false eternity, for no one does, except in the endless repetitions of storytelling. Stories keep part of us alive after the end of our story, and there is something very moving about Scheherazade entering on the happiness ever after, not at her wedding, but after 1,001 tales and three children.

Great stories, and great story collections, are shape shifters. “The Thousand and One Nights,” with its roots in Persia and India, has probably been circulating in one form or another since the ninth century. It first appeared in Europe in the French translation of Antoine Galland between 1704 and 1717. He used a 14th-century Syrian text but adapted and rewrote and added for French taste — it is possible that both Aladdin and Ali Baba as we read them originate with the Frenchman. Subsequent translators took liberties, or used their imaginations. Richard Burton invented a curious Victorian-medieval style. Joseph Charles Mardrus, in 1899, according to Robert Irwin, whose “Companion to the Arabian Nights” is gripping and indispensable, “reshaped the ‘Nights’ in such a manner that the stories appear to have been written by Oscar Wilde or Stephane Mallarme.”

Eastern and Western literature contain other related collections of interlinked tales — Katha Sarit Sagara” (“The Ocean of Story”), Ovid’s “Metamorphoses,” Chaucer’s “Canterbury Tales” and Boccaccio’s “Decameron,” whose frame story has its characters defying the Black Death by retreating to the country and telling tales. Out of such works came 19th-century Gothic fantasy and the intricate, paranoid nightmare plottings of such story webs as “The Crying of Lot 49” and Lawrence Norfolk’s “Lemprier’s Dictionary.” Collections of tales talk to one another and borrow from one another; motifs glide from culture to culture, century to century. If the origin of stories is the human ability to remember the past, speculate about beginnings and imagine the ending, it doesn’t follow that the search for any “pure” or undisputed origin for any story will lead to definiteness.

Scheherazade’s tales have lived on, like germ cells, in many literatures. Dickens, who became the master of serial narration and endless beginnings, comforted his lonely and miserable childhood with “The Arabian Nights,” living in their world and learning their craft. In British Romantic poetry, “The Arabian Nights” stood for the wonderful against the mundane, the imaginative against the prosaically and reductively rational. Coleridge said his mind had been “habituated to the vast” by his early reading of “Romances, & Relations of Giants & Magicians, & Genii.” He used the tale of the angry and vengeful Djinn whose invisible child had been killed by a thrown date stone as an example of pure chance or fate. Wordsworth, in the fifth book of his “Prelude,” describes his childhood treasure as “a little yellow, canvas-covered book,/ A slender abstract of the Arabian tales,” and the “promise scarcely earthly” of his discovery that there were four large volumes of the work.

Various Western writers have been tempted to write the 1,002d tale. Edgar Allan Poe’s Scheherazade makes the mistake of telling her aging husband about modern marvels like steamships, radio and the telegraph. He finds these true tales so incredible that he concludes that she has lost her touch and has her strangled after all. Poe is a combative and irreverent Yankee at the Persian court. Joseph Roth’s Scheherazade resides in the decadent days of the Austrian Empire, while John Barth, in his “Dunyazadiad,” appears in person as a balding, bespectacled genie who tells the nervous Scheherazade the tales she will tell because he has read them in the future and she is his heroine — thus creating another false eternity, a circular time loop, in which storytellers hand on stories of storytellers.

Then there are the modern Oriental fabulists, Naguib Mahfouz and Salman Rushdie, both threatened with death for storytelling. Mahfouz’s “Arabian Nights and Days” is a collection of magical tales with a political edge and a spiritual depth. His stories rework “The Thousand and One Nights”: his Shahriyar slowly learns about justice and mercy, the Angel of Death is a bric-a-brac merchant and genies play tricks with fate. Salman Rushdie’s narratives are intertwined with the storytelling of the “Nights.” “Haroun and the Sea of Stories” pits a resourceful child, Haroun, against the evil Khattam-Shud, who wants to drain the ocean of the streams of story, which are alive, and replace it with silence and darkness. Rushdie’s tale, like Scheherazade’s, equates storytelling with life, but his characters and wit owe as much to Western fantasies — Alice in Wonderland” and “The Wizard of Oz” — as they do to “The Thousand and One Nights.” Another cross-fertilization, another conversation.

Rushdie’s sea of stories is “the biggest library in the universe.” Jorge Luis Borges, to whom libraries, labyrinths and books were all images of infinity, wrote in “The Garden of Forking Paths” of “that night which is at the middle of the ‘Thousand and One Nights’ when Scheherazade (through a magical oversight of the copyist) begins to repeat her stories over again. . . . ” This circular tale fascinated Italo Calvino. It also inspired him, for his “If on a Winter’s Night a Traveler” is the endless tale of a lost reader who starts a book only to find that the rest is missing; when he replaces the book, he finds that it has a new beginning. This novel contains a novelist — as Borges’s tale contains Scheherazade within Scheherazade — who wants to write a book that will contain only the pure pleasure of anticipation of the beginning, “a book that is only an incipit,” a book with no ending, perhaps like “The Arabian Nights.”

Marcel Proust saw himself as Scheherazade, in relation to both sex and death. At the end of the almost endless novel, “Remembrance of Things Past,” he writes a triumphant meditation on the presence of death, which has in fact driven him to create his great and comprehensive book, the book of his life. At one point he even personifies this presence of death as “le sultan Sheriar,” who might or might not put a dawn end to his nocturnal writing. Malcolm Bowie, in “Proust Among the Stars,” comments that “the big book of death-defying stories” with which Proust’s novel compares itself is not Boccaccio’s “Decameron,” in which death appears as a “horrifying initial trigger to tale-telling,” but the “Nights,” where stories are life. “Narrate or die,” for Proust’s narrator as for Scheherazade, is the imperative. “By mere sentences placed end on end, one’s sentence is commuted for a while, and the end is postponed.”

The Judeo-Christian culture is founded on a linear narrative in time. It moves forward from creation through history, to redemption in the Christian case, and looks forward to the promised end, when time and death will cease to be. The great novels of Western culture, from “Don Quixote” to “War and Peace,” from “Moby Dick” to “Dr. Faustus,” were constructed in the shadow of this story. People are excited by millennial events as images of beginnings and endings. There is a difference between these great, portentous histories and small tales that are handed down like gifts for delight and contemplation.

Storytellers like Calvino and Scheherazade can offer readers and listeners an infinity of incipits, an illusion of inexhaustibility. Calvino’s imaginary novelist sits and stares at a cartoon of Snoopy, sitting at a typewriter, with the caption “It was a dark and stormy night,” the beginning of a circular shaggy-dog story. Both cartoons and soap operas are versions of Scheherazade’s tale telling, worlds in which death and endings are put off indefinitely — and age too, in the case of Charlie Brown.

High modernism escaped time with epiphanic visions of timeless moments, imagined infinities that have always seemed to me strained, for they fail to offer any counter to fear and death. But the small artifices of elegant, well-made tales and the vulgar satisfaction of narrative curiosity do stand against death. The romantic novelist Georgette Heyer kept few fan letters, but I saw two: one from a man who had laughed at one of her comic fops on the trolley going to a life-threatening operation, and one from a Polish woman who had kept her fellow prisoners alive during the war by reciting, night after night, a Heyer novel she knew by heart.

During the bombardment of Sarajevo in 1994, a group of theater workers in Amsterdam commissioned tales, from different European writers, to be read aloud, simultaneously, in theaters in Sarajevo itself and all over Europe, every Friday until the fighting ended. This project pitted storytelling against destruction, imaginative life against real death. It may not have saved lives, but it was a form of living energy. It looked back to “The Thousand and One Nights” and forward to the millennium. It was called Scheherazade 2001.